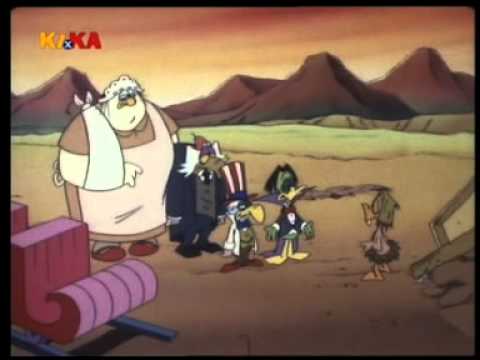 The previous version was an evil villain, willing to blackmail and force his way into stardom as opposed to the current Count, who merely tries to get in the legitimate way and was fixated on being a TV star, rather than settle for fame in some other branch of entertainment.

He has far greater magical powers and makes much more use of them. He has a thick accent consisting of lisping, stuttering and occasional squawks.

Most notably, he was not a vegetarian in the Danger Mouse version. In his very first appearance, he threatened to drink Danger Mouse's blood, only to be chased away by the sun.

The Danger Mouse Duckula was destroyed and fell to ashes, resurrected during the 8th astronomical house of Aquarius. During his recent appearance in the reboot , the new Duckula is a mix of the original and the vegetarian version from his spin-off.

Marvel Comics via their Star Comics imprint produced a comic series based on Count Duckula, and introduced an additional difference between this incarnation of Duckula which separated him from his predecessors.

Due to ketchup being used in the resurrection ceremony, this version of Duckula has ketchup, rather than blood, flowing through his veins.

The attraction was mutual, and the two continued their relationship though the majority of the series after their introduction, though Vanna did not always appear in every issue of the book.

Igor, the Count's butler, is a traditional horror servant based on the stock character Igor , and adds a decidedly dark streak to some of the show's humour.

He greatly dislikes his master's behaviour, and often encourages him to act in a far more ghastly manner. Although he will generally obey Duckula's specific orders, he remains convinced that, if he could only talk Duckula into biting, maiming, torturing and otherwise brutalising people, he would return to the "good old days" of the previous counts who behaved more like evil vampires.

Igor hates words such as "bless you," "nice," "good," and "lovely. In "Dr Goosewing and Mr Duck" when he accidentally drinks the carpet stain removal liquid created by Goosewing his personality changes to an overly sweet-natured demeanour and he becomes eager to help Goosewing destroy Duckula.

He is a hunched, balding vulture with a deep, slow voice. In the episode "Arctic Circles," he states that he has served for "seven-and-a-half centuries," indicating that Igor is himself either immortal, or extremely long-lived through some unknown means.

It is unknown if the 7. Nanny is Duckula's nanny and housekeeper. She is an extremely large in the episode "Alps-A-Daisy," it is revealed she is seven feet tall and clumsy hen with a very strong Bristolian accent and her right wing inexplicably always in a sling, possessing incredible strength and inevitably messing up whatever task she is set to do.

She has a blind spot regarding doors, and often crashes through a door without opening it first, or more commonly walks right through the wall, especially a few feet off from the door's position.

Not surprisingly, she is the one who mistakes ketchup for blood in Duckula's current resurrection.

The episode "Prime Time Duck" reveals her first name to be Amnesia. She is supremely unintelligent, completely unreliable, but utterly devoted to her "Ducky-boos," as she calls Duckula, and has a deep maternal affection for him, although her clumsiness often inadvertently causes him harm.

A recurring gag is her inability to understand what people around her are talking about. She often mixes up words and takes insult at conversations not directed at her.

She is very ditzy and motherly, sometimes hugging Duckula so tightly she nearly suffocates him. In "Dr Goosewing and Mr Duck" when she accidentally drinks the carpet stain removal liquid created by Goosewing she becomes extremely intelligent.

Count Duckula's home is an archetypal Transylvanian castle with all the trimmings: dungeon, torture chamber, library of macabre texts, laboratory, and more.

The castle is also home to an often referred-to, but never seen, werewolf named Towser, which Duckula does not believe exists he often refers to it as "the werewolf we don't have".

The castle can teleport to any place on earth and beyond , but returns automatically at dawn, "Eastern Transylvanian Standard Time".

The teleportation is activated when Duckula enters an upright coffin while he states where he wants it to take him often, he will have to come up with a rhyme to activate it properly.

The controls to this device are inside an old-fashioned cuckoo clock that hangs on the wall. The controls have two live mechanical bats, Dmitri and Sviatoslav, who are known for bad puns and jokes.

Duckula himself, throughout the entire series never notices them except in the episode The Rest is History. Von Goosewing is a mad scientist and vampire hunter, a spoof of Abraham Van Helsing.

He is a goose that speaks in a German accent, and wears an outfit not unlike that of Sherlock Holmes. He pursues Count Duckula relentlessly, never able to comprehend that Duckula is actually completely harmless.

He is a terrible scientist, often getting maimed by his own crackpot inventions, he is supremely unobservant, and often bumps into Duckula and converses with him for several minutes without realizing to whom he is speaking.

Von Goosewing appears to have an assistant named Heinrich who never appears on screen. Von Goosewing often calls for Heinrich, and often blames his failures on him.

In fact, "Heinrich" appears to be just a figment of Von Goosewing's imagination, an imaginary friend. Vanna and Duckula's reciprocal romance further infuriated Von Goosewing, as he now believed that Vanna was under some form of mental manipulation, assuming it to be the only reason she would have any interest in Duckula.

This belief made him all the more intent on destroying Duckula as he now considered his mission to have a personal component to it, believing Duckula to be a threat to Vanna's safety.

In an alternate universe depicted in the final issue of the comic, Von Goosewing, though he does not appear in the issue directly, is stated to have succeeded in destroying the counterpart Duckula of that reality, indicating it to be the reason why the 'regular' Duckula of the series had no reflection, and leaving Igor and Nanny without anyone to serve until the next time the resurrection ritual could be performed.

The Crow brothers are four criminally-inclined crows named Ruffles, Burt, Junior, and the masked brother according to a comic in a Count Duckula annual.

They typically scale the walls of Castle Duckula with the aid of climbing equipment. They are always seen hanging off one another with the use of bungee cords to climb the walls of whatever building they plan to scale.

Their goal is to get at the treasure inside the castle, but they will rarely make it to the top. Gaston and Pierre are a pair of French criminals and occasional villains.

Although they are both undeniably incompetent, the arrogant Gaston is ostensibly the "brains" of the outfit. Gaston is a tall, thin, black stork , while Pierre is a short, stubby parakeet who sounds similar to Bluebottle from The Goon Show.

The characters were adapted into non-bird form for yet another Cosgrove-Hall animated series, Victor and Hugo.

A ruthless crew of piratical penguins originally hired by Count Duckula, this crew of seafarers turn on Count Duckula when his antics crash their ship.

This is a very clever cartoon from Cosgrove-Hall, the same group that produced Dangermouse. It is about a vampire duck that, due to a mishap during the re-animation process, is now a vegetarian.

He uses a special machine in his castle to transport it to different places in search of treasure, money, and fame as a musician. He is accompanied by Igor, the family butler, who is a believer in the Old Ways of being a vampire.

He is disappointed that the Count is not as evil as the old Count used to be. Also in the castle is Nanny, the nursemaid. She is big and dimwitted. 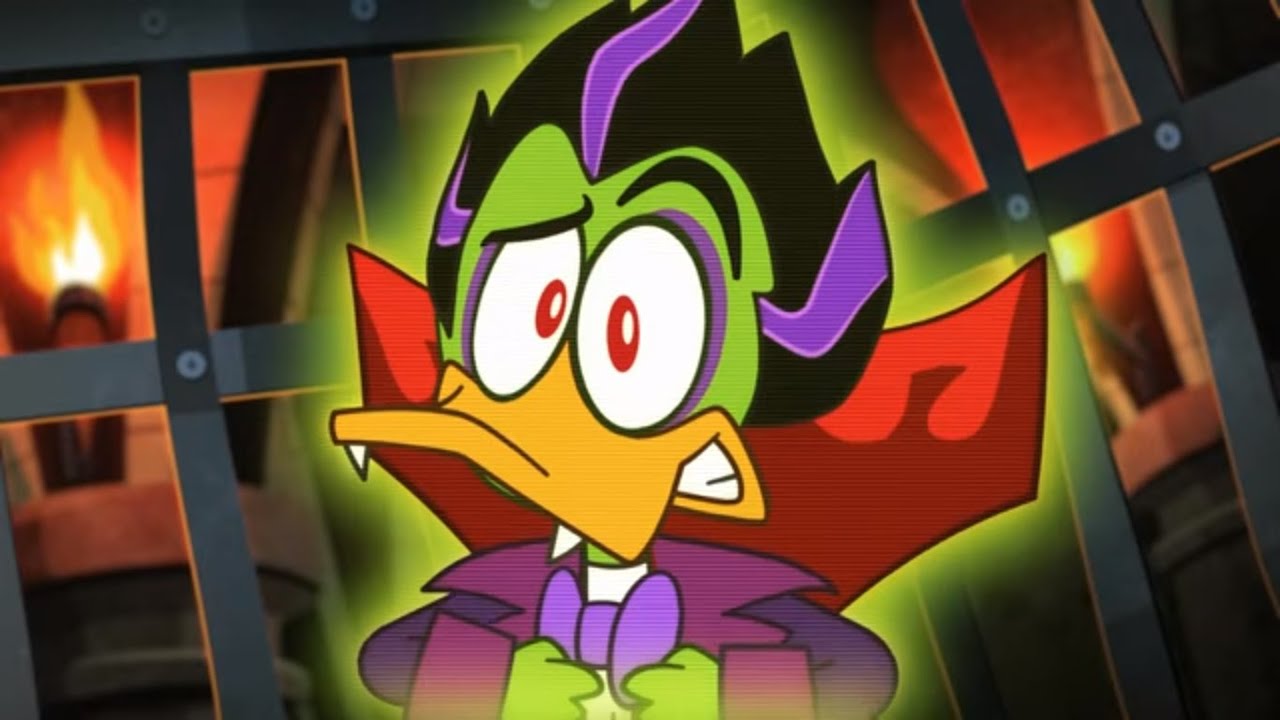